The Mural Is No More

First, I apologize for mixing movies in the title just to grab your attention.

Second, here’s the reason for returning to this much-abandoned corner of the Web. The occasion is somewhat bittersweet. It marks a passing which apparently many parents bring about in their children’s lives. My parents brought it upon me, and now I have brought it upon mine.

Before I go any further and lest you conceive some awful conception in your mind as to what I’m about to write about, let me explain that this is just about a wall painting in a bedroom. Nothing more, nothing less.

When I was in high school (Fox Valley Lutheran in Appleton, WI), I was an avid stamp collector. (Today I’m a less-than-avid stamp collector.) I painted oversized versions of at least two stamps on the wall of my bedroom. They were the original Love stamp and another which I can picture in my head right now but can’t remember what it commemorated. Was there a third stamp too? Sorry, I know there are pictures of them, but I can’t find them now either.

Eventually my parents decided to paint over the stamps long after I had moved out of the house.

I think it was when she was in high school (WISCO in Milwaukee) that our daughter started to paint a mural featuring scenes from the Lord of the Rings trilogy on a bedroom wall of our house. Until yesterday, that wall looked like this. 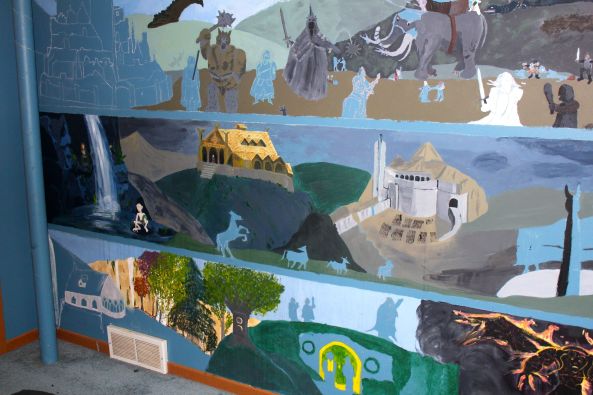 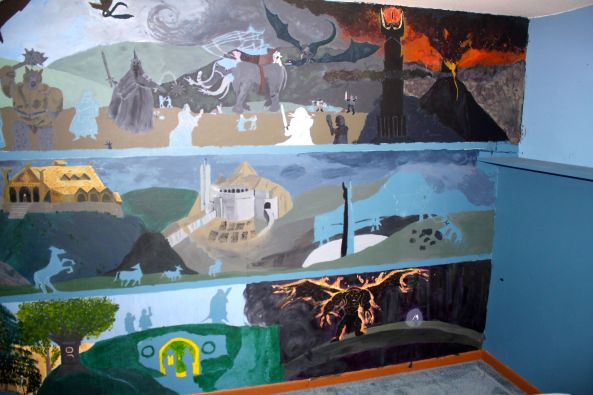 Not too long ago, we decided it was time for this wall to be repainted as well. All precious things must come to an end. Today it looks like this. 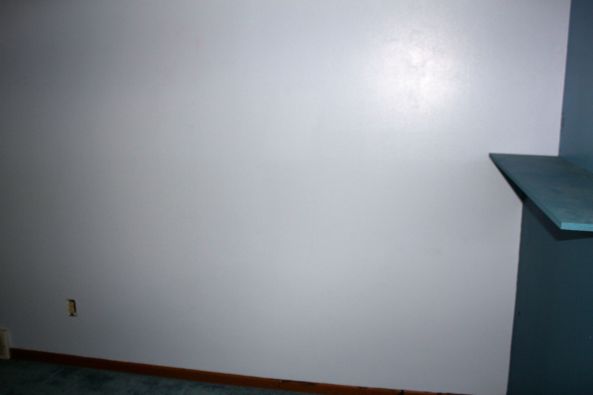 For the record, that’s actually a light blue, not white.

Gandalf was hesitant to leave, but I was a little disappointed that the Balrog didn’t put up more of a fight. Fortunately, much like Frodo’s narrow escape, the Eye did not discover what I was up to either. Gollum scampered off in search of another ring. I think Strider was the last to go.

As I was painting over everything (which only took one coat…get high-quality Behr), I (re-?)discovered a lot of detail that never got filled in. That’s part of the bittersweetness.

If you ever visit this room (and I’m not sure why you really would), you’ll still see a few remnants of what used to be. There are a few leftovers in the corners and some markings on the footing pole that I didn’t paint over.

‘Twas time to move on. The room is now a little brighter and a lot less scary.

I wonder if someday a grandchild will pick up a paint brush with his or her own wonderful designs in mind.

Welcome Back to My Corner

Actually, that welcome is as much to me as it is to you. I had almost forgotten I owned this little corner of the Web. Then, when I wanted a place to tell the story below, I thought again of this blog that I haven’t used in over a year.

With just that little bit of ado, here’s the story of the power pole at Grandview and Northview in Waukesha.

Patience Is a Virtue, But…Really? 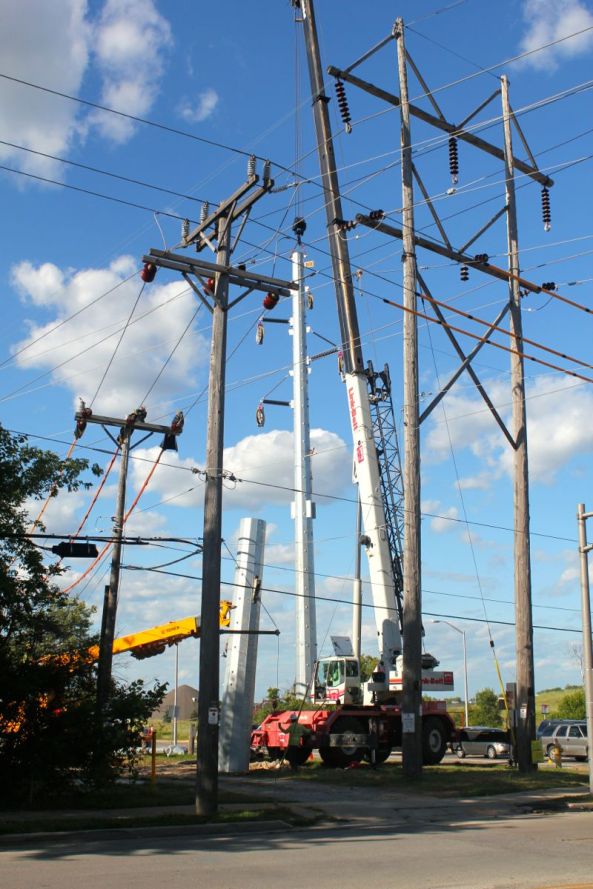 I’m not sure how long the shiny, tall, new power pole was lying at the corner of Grandview and Northview, but it was many months. The power company intended to replace a whole string of wooden poles that goes at least from the freeway (I-94) to downtown-ish Wauksha – and maybe further in both directions.

It seems that the pole on the corner nearest our house was the last one in the line to be raised.

And I almost missed it.

Yesterday (August 3), it looked like they were just about ready to lift the pole into place, so I took my camera down there to capture some of the action. However, I was a little too early.

A couple of power company employees in their truck happened to stop for the traffic light right next to where I was standing on the sidewalk. The passenger dude told me that, per their morning meeting, it sounded like the pole would be set the next day (i.e. today, August 4), so I didn’t have to waste any more time there that day.

Aside: He also mentioned that next summer they intend to add a turning lane at this same intersection. I think he meant a southbound lane on the north side of the intersection going west onto Northview. We’ll see.

So I went home to wait some more. Unfortunately, I was supposed to go to Appleton the next day (i.e. today) to help my parents with various and sundry things.

Later in the afternoon yesterday, I went to pick up a game (the Fun Funky Fingernail Game) I bought on Craigslist (for resale, really, I promise). Then I stopped at the store to pick up some solar salt. As I neared home and stopped at the Grandeview-Northview intersection – lo and behold – they already had the lower section of the pole upright in its hole in the ground!

The red light seemed to take forever. I sped (perhaps literally) home the remaining 3 blocks, flew (perhaps literally) inside to grab my camera and jogged (literally) down to the corner just in time to get footage of the crew adding the top piece of the pole to the bottom, as you will be able to see in the video.

Fortunately, that piece of video is in focus. Somehow near the end of that first clip I managed to mess up the focus and didn’t notice until I got home. I apparently got the focus right again when I took the still photo of the worker using (what I think is) his plumb line. 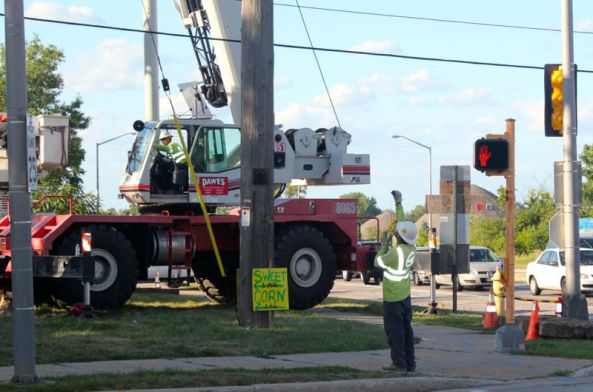 Checking plumb – Another worker was doing the same about 90-degrees around the side of the pole.

The video I took after that – way at the end of the movie – looks good again.

Sorry about the blurry stuff in the middle.

The Finished Product – The Tale of the Power Pole

I spent about 2 hours at the intersection taking over a dozen clips of the more interesting stuff. If it was all in focus, I’d take time to explain it all to you, but you’ll probably zoom through that middle part or skip it entirely, assuming you watch it at all.

I’m pretty sure this will be a once-in-a-lifetime event, which is why I was so excited to see it. As technology goes, this isn’t the highest (pun left in for groans) that there is these days, but it’s still pretty cool. (Remember, I’m still amazed by radio.) I’m sure it’s just another day’s work for the guys who actually put it in place, but it’s something special for the rest of us.

Two Steps Forward and One Step Back

If you live in the United States, especially east of the Mississippi, you probably had some pretty nasty weather in the past week.

Here in the Midwest near Milwaukee, we had some rain and then a little bit of snow. The picture shows just a tiny bit on the deck yesterday. (You do have to look closely.) 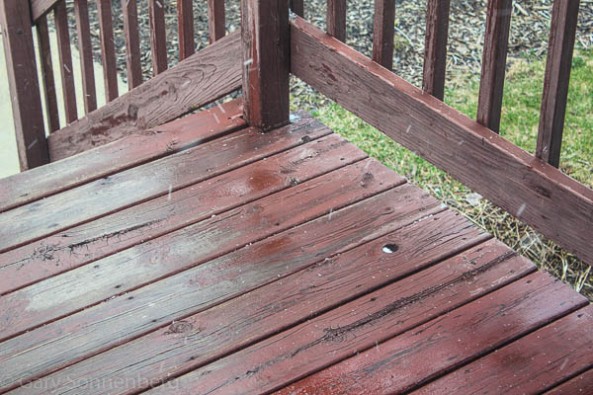 This morning the deck was covered in white, but it was gone before I thought to take another picture.

So what? This isn’t news anymore. Why bother writing about it?

Those of us near Milwaukee had no right to complain about a smattering of the white stuff while folks in Illinois were getting golf ball sized hail, people in Texas were being threatened by tornadoes, and citizens elsewhere dealt with some mean straight line winds.

Here’s my other point.

God says more than once (and I’m paraphrasing here) that, if you don’t like the weather, it’s because you’re not listening to him. Check it out.

But that’s all Old Testament stuff from long, long ago. That doesn’t apply today, does it? He wouldn’t do that today, would he?

Why not? What was a good sign back then can work just the same way today. We’re not so different from people back then as you might think. Generally speaking, God doesn’t talk to us directly through people (prophets) anymore. Why shouldn’t he use nature as a way to get the attention especially of those who don’t read or listen to the Bible?

Pay attention to the weather in more ways than one. You might respond differently the next time you get precipitation or winds you don’t like.

Related tag: I’ve wondered if thunder is the actual voice of God more often than we know but we just can’t understand it. That’s not as weird as it first sounds, if you know your Bible.

Recently I came upon this unusual species in our back yard. Can you tell what it is? 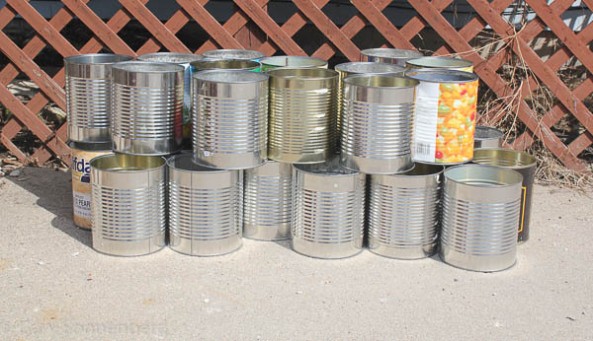 I can’t recall ever seeing such a large flock (herd? murder?) of them in our area.

When I first saw them, I kept my distance. I didn’t want to scare them off. They seemed to stay huddled together for self-protection.

But then I crept closer for this shot. 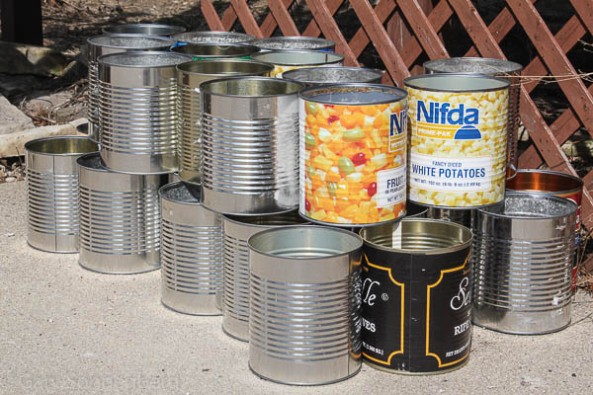 As you can probably see, they appeared to be all the same species, but there were a few mutants. Or maybe – even though they looked to be the same size – they were the young who hadn’t shed or molted their baby camouflage yet.

I wondered if I could get even closer without scaring them off.

Sure enough! They let me get right above the pack. 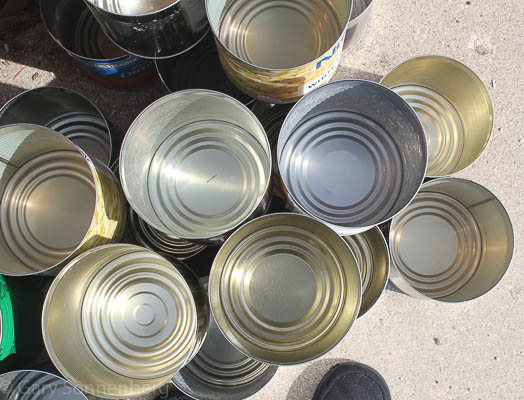 I could look right down inside. (It wasn’t too creepy or gross.) I guess they figured they had little to fear, since they outnumbered me about two dozen to one.

I didn’t try to touch any of them though. I thought that would be going a little too far. I know that, for some critters, if you touch one, it won’t be accepted by the clan anymore. Best to uphold the Prime Directive.

I’m really glad I got these shots yesterday so I could share them with you, because they aren’t there anymore. I seriously doubt that they’ll return to our back yard. I (and maybe some of you) might get a chance to see them somewhere else in the next few months though.

If you spot one or more of them (in the wild or in captivity), let me know.